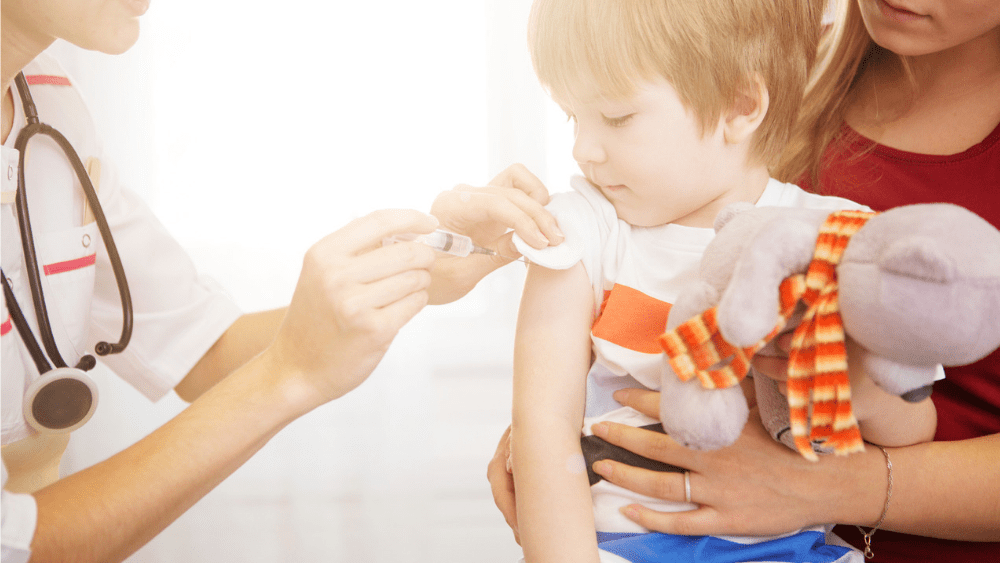 New parents have lots to remember in their first few months of parenthood like learning how to change diapers and functioning on no sleep. Another crucial piece of knowledge is understanding when babies and young children need their vaccines and which diseases the vaccines protect against.

Rochester Regional Health’s Dr. Larry Denk gives his insight into 6 common vaccines for babies and young children, with vaccine schedules for each!

“The Hepatitis B vaccination is the first vaccination a baby receives within the first 24 hours of its new life outside the womb.”

The Hepatitis B vaccination protects against the Hepatitis B virus which is a liver infection that can lead to liver disease, cirrhosis of the liver, and liver cancer. Hepatitis B kills 780,000 people each year. It can be transmitted through needle-sharing, sexual contact, or from mother to baby at birth.

“The DTaP vaccine is typically given at two, four, and six months, with a booster dose that’s somewhere between 15-18 months.”

The vaccine protects children against diphtheria, tetanus and pertussis. Diphtheria is a disease of the respiratory system that causes breathing problems and can lead to paralysis, heart failure, and death. Diphtheria is contagious and is transmitted through coughing and sneezing.

Ask a Doc: Getting Vaccines During Pregnancy

Tetanus is also known as lockjaw, and is caused by bacteria often found in the ground or soil. The bacteria releases a toxin that attacks the nervous system and causes muscle spasms, often to the jaw and neck, breathing problems, and can lead to death.

The CDC estimates that tetanus kills one in five people who get the disease.

Pertussis is another highly contagious disease that causes coughing spasms so severe that infants have difficulty eating, drinking, or breathing. Pertussis can result in pneumonia, seizures, and death.

“Kids are more prone to get infections which can obviously lead to serious consequences, so that’s why it’s important to start getting these vaccinations for children when they are young,” said Denk.

Find a Primary Care Doctor Near You

“With the recent measles outbreak, now is more important than ever to get the MMR vaccination.”

Of the three diseases the MMR vaccination protects from, measles can be the most severe. About 30 - 40% of patients with measles will develop one or more complications, like pneumonia, meningitis, hearing loss, seizures, encephalitis, vision loss, developmental delays or death.

“During outbreaks, the vaccination is often given at a younger age, between 6 and 12 months. However, parents should keep in mind that getting the vaccination early doesn’t change the vaccination schedule. A child will still get their regular two doses after they turn one year old,” said Denk.

Mumps causes fever, headache, muscle aches, tiredness, appetite-loss, and swollen glands. Rubella can lead to a fever, sore throat, rash, headache, and red, itchy eyes, and is especially dangerous for pregnant women as it results in a high incidence of permanent hearing loss for the baby.

“Since the virus can still live in certain parts of the world, it’s a very important vaccination for children, especially those traveling to underdeveloped countries.”

Fortunately, polio is no longer the threat that it once was to children in the United States, but the virus is still present in countries with underdeveloped sewage and water systems and where vaccination requirements are more lax. But as long as one single child is infected with polio, the global threat remains.

“The development of the polio vaccination in the 1950s set us on the path to completely eradicating polio worldwide, and we are nearly there,” said Denk.

“Just because HPV is a sexually transmitted infection, doesn’t mean parents should wait until their child is sexually active to get the vaccination.”

HPV, or Human Papillomavirus, is a sexually transmitted infection that is one of the most important vaccines for children, as the infection contains more than 150 viruses.

HPV can cause many types of cancer and is spread by intimate contact with skin. The vaccination is a series of two shots between 9 and 16 years of age with at least six months between the two doses.

“Studies have shown that the immune response is actually better at between 9 to 11 years of age than it is if a person is older, so it’s one of the most important vaccinations for children to get when they’re younger rather than older,” said Denk.

“The best time to get your vaccination is in October, or as soon as the vaccination becomes available.”

Flu is a seasonal virus that impacts up to 50 million Americans each year. Flu vaccinations are among the most important seasonal vaccinations for children because flu can be exceptionally harmful to kids due to their weakened immune system. Children should get the flu shot after they turn 6 months old.

“It takes a few weeks for the vaccine to protect against the flu, so getting the vaccine early will protect your child for longer,” said Denk.  “If you miss getting your vaccination in October, you should still get it in November or December.”

While the vaccine does not provide 100% immunity against influenza, studies from the CDC have shown that it reduces a person’s chance of getting the flu by up to 60%.

With winter at its peak, it’s important to learn what’s fact and fiction when it comes to winter illnesses. Sonia Dar, MD, Primary Care Physician at Rochester Regional Health, tells the truth about the most common winter health myths.