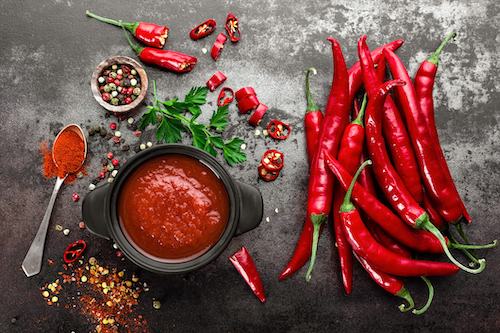 The health-related risks and benefits of spicy foods have long been a subject of discussion. From study-based evidence to personal experiences, chili peppers and other spicy foods are believed to be both helpful and harmful to different aspects of human health.

Here is a breakdown of claims when it comes to spicy foods and the human body.

Spicy foods contain capsaicin, the bioactive ingredient in chili peppers. Capsaicin breaks up mucus, which can help effectively relieve coughing and a sore throat. However, capsaicin can increase the production of mucus, causing a more prevalent runny nose.

While spicy foods can make your sinuses feel clearer, they can’t cure the common cold. In fact, spicy foods are known to increase nausea and stomach pain.

Be cautious when consuming spicy foods while under the weather. They may temporarily help relieve some symptoms, but the spice cannot cure your cold.

Read about more myths in our new flu guide

While capsaicin has been proven to increase fat burning, it is not a weight loss solution on its own. Adding a mild amount of chili pepper to a healthy diet can be a beneficial part of a weight management solution.

“Spices, rather than salt, are a healthier way to season food,” says Hannah Smith, RD, nutritionist at Rochester Regional Health. “Some spices like chili and cayenne pepper are considered strong antioxidants.”

Eating spicy foods is not a simple weight loss solution. A spicy barbeque rib has no additional health benefits just because it’s spicy, nor is eating a chili pepper each day an effective way to lose weight.

However, eating spicy foods more often can affect eating habits in a way that leads to weight loss.


“People tend to eat smaller portions when consuming spicy foods,” says Smith. “This can be beneficial if you tend to over-consume the recommended portion size.”

Spicy Foods Can Cause an Upset Stomach: FACT

“Although spicy foods can worsen the symptoms of gastrointestinal issues, it is often hard to tell which component of the food is causing it,” says Erik Olsen, DO, gastroenterologist at Rochester Regional Health.


“For example, eating spicy chicken wings will likely worsen the symptoms for someone suffering from gastrointestinal issues, but it is more likely the butter and fryer oil than the spicy component.”

Consuming spicy foods is not a cause of ulcer disease. The idea that food, in general, can cause ulcers is a common misconception.

“People often think they have an ulcer due to food or stress. However, this is not true. Ulcer disease is usually caused by anti-inflammatory medications or bacteria in the stomach called H. pylori.”

The most commonly used spices among the participants in the study were fresh and dried chili peppers. It’s important to remember that fresh peppers and spices can have health benefits, but spicy fast food, condiments, and other foods high in sugar, fat, and preservatives, are not healthy.

“Peppers, like most vegetables, have antioxidants,” says Rhianon Condello, nutritionist at Rochester Regional Health. “This helps with cancer prevention and oxidative stress on arteries.”

Oxidative stress is an imbalance within your blood that can lead to diseases like diabetes, high blood pressure, and heart disease. Thus, eating fresh peppers can contribute to a longer, healthier life.

Flu Update: February 2020 Numbers Are In

Flu season 2020 is as active as ever. Learn why the CDC and health officials say this year's strains are acting different than year's past.

When Gary Least was diagnosed with atrial fibrillation, the new WATCHMAN heart device saved his life.