Jessie Flynn was diagnosed with multiple sclerosis in 2011. Her husband Bob is a type one diabetic. So when COVID-19 began to spread throughout the region, the Flynn’s knew they were among those in most danger.

“We are the definition of at-risk with autoimmune problems and other complications,” Bob said. “And I take a monthly infusion that knocks out my immune system.”

The Flynn’s self-isolated inside their Syracuse home in early March, afraid to come in contact with others.

“I was deathly afraid that should my wife come in contact with anybody with [the virus], I may not see her for a very long time.”

Jessie’s gallbladder became severely infected in the midst of the pandemic, but the fear of contracting COVID-19 didn’t stop her from getting the help she needed.

The Flynn’s drove from Syracuse to Newark-Wayne Community Hospital, believing that finding a rural location with far less COVID-19 cases was the safest call. They were right.

“It was critical for Jessie to come in and seek care,” said Matt Schiralli, MD, general surgeon for Rochester Regional Health. “If left untreated she could have experienced many more complications that would have been very dramatic for her.”

Jessie was in pain, she explained, and was afraid because many of her symptoms mirrored what she was hearing about COVID-19.

“You can only imagine what it’s like to drop your wife off in the middle of a pandemic not knowing when you’ll be able to see her again,” Bob said. 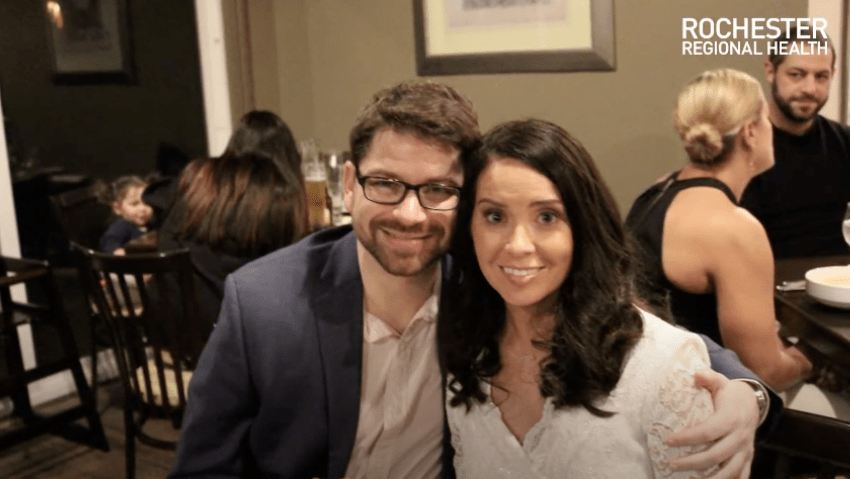 Bob and Jessie’s love story is the kind of tale you see in a movie. They were friends since the age of five and prom dates in high school before going their separate ways. After reconnecting in 2017, they married this past October. Now, about six months into their marriage, they put their faith in the team of healthcare professionals at Newark-Wayne Community Hospital.

“When I dropped [Jessie] off, three people came out with face guards. I got out of my car and walked 10 feet away with her things by my side for staff to grab. They took them, they took care of her, and nodded to me that she was going to be okay.”

Dr. Schiralli and his team took a non-operative approach to get Jessie back to her baseline level of health, with plans to remove her gallbladder at a later date.

Jessie is now home recovering and will return for her surgery at the end of May.

“Everyone was great and attentive. I really felt safe there and in good hands.”

Reopening with phase 4 has begun in many upstate NY regions including Monroe County. Dr. Michael Mendoza says we need to be vigilant and keep social distancing as the warm weather continues. Get the latest numbers of coronavirus cases.